Questionable Content is a webcomic created by Jeph Jacques, having started at 2003, and still running strong and interesting up to this day, with five updates a week (Jeph, if you read this, I'm in awe). 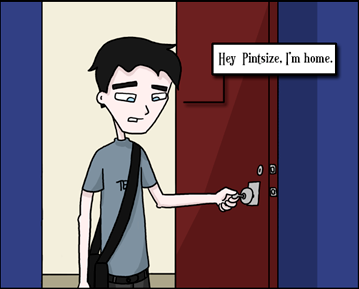 This webcomic starts as a slice-of-life of twentysomething Marten Reed (pictured above), and his AnthroPC (a kind of computer that has sentience, human-like intelligence and feelings, which are commonplace in this comic's world). A few comics in, he meets Faye Whitaker, a girl who works in a coffee shop. After an incident with a toaster, she becomes Marten's roomie.

Slowly, the cast grows to include Faye's boss Dora, Marten's friend Steve, and many more.

The comic goes from simply about Marten's life, and about interactions between all characters, their struggles with life, relationships, employment and in general just about this group of young adults trying to figure out life. 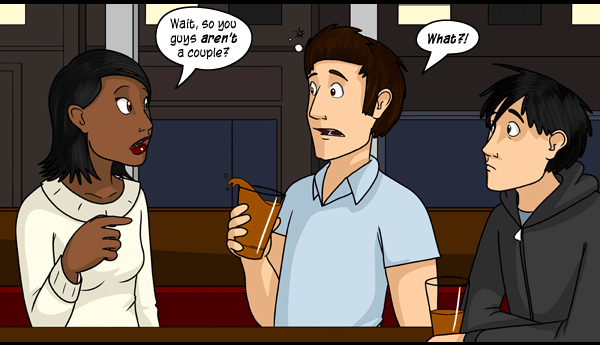 While it starts with lots of music-based humour (after all, the author DID get a music degree in college), mostly poking fun at indie bands and hipsters, it has grown, and thanks to having such a varied cast with different backgrounds and rich personalities, many different topics have pop up, leading to it being a very interesting read.

Not to mention how much the art has improved in its 11 year run! Paraphrasing the artist, if you don't like the artstyle, just wait a week or two and it'll change again.

While trying really hard not to spoil anything, I'll just say that while it is often lighthearted and fun, it has on several occasions touched serious subjects such as depression, alcoholism, and transgender acceptance, amongst many more. In my personal opinion it is done in a very respectful manner. It adds depth to the characters to see them have problems, and actively try to work through them (or in the case of the last one, prove that for the cast it isn't a problem at all).

Be warned, though, that it is a LONG read, getting dangerously close to page 3000. I can assure you, however, that it is completely worth the time you'll sink into this. And if the art at the start of the comic puts you off, I'll just say again, the artist improves an impressive amount.

In general, I recommend you give this comic a try. From the character dynamics that the huge cast hast to just seeing the silly shenanigans that sometimes happen, it is certain to keep you entertained.

I hope you enjoy it!

For another read that is getting crazy huge that also has MOST INTERESTING character dynamics AND a huge cast, I recommend Homestuck. For yet another long-running comic to have a delicious archive binge on, yet in a MUCH more sci-fi tone and nature, I recommend Freefall. I will write about this in the future, sadly I could not find a decent logo, so I'll just present you with a panel.


I hope you enjoy this webcomic as much as I have, and that you have a week as wonderful as you are!

Thank you for reading, Dreamers, and see you next week!