A shapeshifter and an evil knight-turned-scientist

Terribly sorry about the delay, I went to TCAF and caught the Con Flu and had to spend Sunday and Monday on a delirious haze of medicine and sadness.

Anyway! This week I want to talk about a graphic novel that's been freshly published. 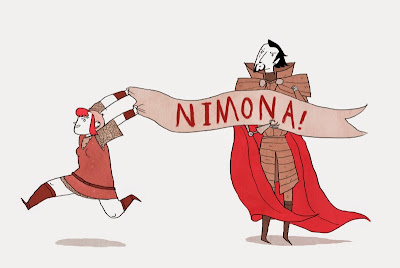 Nimona is a webcomic-turned-graphic novel created by Noelle Stevenson.

This is the story of a shapeshifting girl, Nimona, and the 'evil' knight-turned-scientist she becomes a sidekick to, Ballister Blackheart.

Ballister is a man with a grudge against the Institution, a, well, institution that pretty much runs the kingdom, for misdeeds done to him before the story began.


As the story progresses, the duo perform a series of small heists to undermine the Institution. However, at almost every turn they're impeded by Sir Goldenloin (who might or might have not picked his own knight name) who, while a capable knight on his own, can never truly stop the two protagonists or their schemes.

The daring heists Nimona and Ballister perform are not the only focus of the story, for between them there are also moments of calm where we get to see their life in Ballister's lab, brimming with jokes, backstory flashbacks and clashes that anyone could expect to happen between a teen and an adult.


There is much more to the story, of course, but I am not going to spoil the really juicy bits for anyone.

Originally published in its entirety as a webcomic, it is now a published graphic novel available in physical copy and in ebook format, with the former webcomic address now showcasing the first three chapters for free to pique your curiosity. However, a good chunk of the comic itself was redrawn for publication, leaving the three chapters in the webpage in the old style. The author's art improved greatly during the comic's run!

Furthermore, for anyone that got to read the comic online and is on the fence as to whether to buy it or not, there is an epilogue that is only present in the published version, should you be interested in having a little more Nimona in your life.

It is a sweet, relatively short story about rivalries, friendships and a shapeshifting teen with attitude. You won't go wrong with this title.

If you want more stories of evil geniuses and their sidekicks, there's also the ongoing webcomic Evil Plan, only that is more in the line of a standard superhero universe, as opposed to technological fantasy the way Nimona is.

Take care, and I hope you have a fantastic week!