This week I want to talk about a short(ish) game that does tutorials right and humour pretty close to perfect.

Put on your kinetic energy-dispelling boots and let's talk about 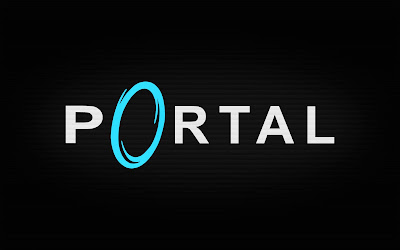 Portal is a game developed by Valve and released on every console and computer known to man and possibly some that aren't, so long as they aren't portable.

This is a game that is the perfect example of how to do tutorials in a natural manner that doesn't make the player feel like their hand is being held all the way through.

It achieves this by introducing mechanics and changes slowly, with each new level (or test chamber, as the only NPC in the game calls them), and letting the player learn slowly in very controlled environments.

Through its theme and story it manages to build a tutorial that doesn't feel like a tutorial.


The story begins with the player character, Chell, waking up in a small cell with no way out. After a few seconds, a voice comes in from a speaker, explaining that the player is about to embark on a series of tests for the furtherment of Science, at which point a portal opens that allows the player to proceed.

What follows is what was promised: A series of rooms filled with puzzles that the player solves to progress, with a promise of cake at the end.

Pretty straightforward, even if the cake at the end became such a huge internet Joke that even the developers deliberately avoided to have any cake in this game's sequel (but that's another story).

Portal travel is also pretty straightforward, but its uses are innumerable. After placing two portals, one orange and one blue, on any appropriate surfaces, the player can walk through one and come out the other. This very simple mechanic is used in many different and creative ways throughout the game, proving to be a most versatile game mechanic.

While the game's trailer has some breakneck speed, twists and turns, the gameplay itself is fairly relaxed, never being too punishing nor demanding, to the point that the player will only get those high speed shots if they actively try to make them happen, so rest assured if you suffer from motion sickness!

All in all, this game is very short by modern game standards (two hours in average, I'd say). It isn't terribly difficult and has a very gentle learning curve, but if the players actually want a challenge, there are bonus modes that change around the contents of the test chambers to really amp up the difficulty, however those are entirely optional.

Even if you aren't a big videogame player, this is still a highly recommended game, both for its gameplay and for the snark that the voice guiding you provides as you go through the levels.

I may have omitted a few elements of the end of the game, but that is something that I'd rather the players experience for themselves!

This game is available on the Steam network, and runs on most computers, AND it is available for almost all home consoles, so if you're interested, it is easy to find and play.

I hope you give this game a chance! If you do, let me know what you think on the comments below!

Thanks for reading, and I hope you have a fantastic week!