This week, let's talk about an indie game you probably have heard about! 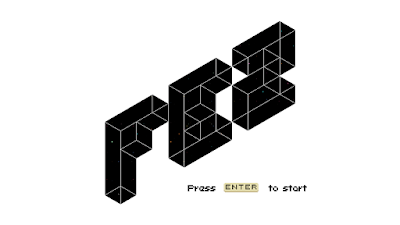 Fez is a game developed by Polytron Corporation and released on Xbox Live Arcade, Steam (PC), Linux, OSX, PS3, PS4 and PSVita. Also probably for the computer on your fridge. Maybe.

In this game you control Gomez, a little white creature living on an island with others of its kind. One day, however, you are summoned to the top of the island, for a ritual. During it, you are blessed by a cube, and granted a fez. However, something goes wrong, which makes the cube explode and shatter, scattering all its parts to the winds.

It is your job to clean up the mess and reassemble the cube.

The gameplay is a peculiar mix of 2D and 3D. So long as it is visible and is clearly a horizontal line, it is a platform. However, upon being blessed by the Cube, you gain the ability of changing the perspective, allowing to see the current location from its sides and its back, revealing hidden doors, new paths and pieces of the cube.

By manipulating the perspective from which levels are seen, performing challenging platforming jumps, and solving mysterious puzzles, you slowly reassemble the cube and gain access to new areas.

Some puzzles are simple, such as pushing down a button with a block. Some others require deeper thought, solving riddles and deciphering the mysterious runes present all over the world of Fez.(Or looking at a guide. No judging, I needed to do so!)

The art style is pixel art, with all elements looking simple on 2D, only to reveal their complexity and depth upon turning, which creates an intriguing contrast between simple textures and colours to the complex reality of a 3D world, without creating a jarring disconnect.

What is particularly interesting about this game is its puzzle design. Even without going into code breaking and hidden areas, the platforming itself is worthy of praise. To make sure that a platform was only reachable from one point of the level at one particular point of view without making it impossible to guess or glaringly obvious is a feat of level design worth praising, and one worth examining closely.

Let it be known, however, that not all cubes are needed to reach the end, and to get a few of the last cubes, one must first see the ending to gain a new ability, so don't feel discouraged if at some point you can't figure out the secret of a room. Most likely, you're not supposed to yet!

I hope you give this game a chance, and if you do, that you let me know what you think!

Best wishes, and I hope your time is fantastic!