A battle against vampires!

This week I want to talk about a fantasy game. 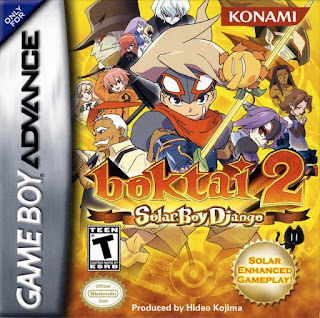 Boktai 2: Solar Boy Django is a game developed and published by Konami, released for GBA in Japan and North America in 2004 and the rest of the world in 2005.

Yes, this game is a sequel. However, pretty much anything that needs to be known is revealed during this game, so no worries about being lost in the story.

This game is about the Solar Boy, Django, returning to his hometown of San Miguel after hunting vampires, only to find that everything but the town square has become overrun by monsters. One of the monsters takes his only weapon, the Gun del Sol, leaving him defenseless.

He runs into the Sunflower Girl Zazie, who lends him the Sol de Vice that allows him to use magic and attack supernatural enemies.

After this, the goal of the game is to explore the remains of San Miguel to look for survivors to populate the empty buildings of downtown San Miguel, find out what the monster that stole the Gun del Sol is, and slowly reveal more about what happened to the city, whilst fighting off vampires that seem to have a dark plan for the world...

The gameplay is an action adventure RPG from a diagonal perspective with some puzzles thrown in the mix. Combat is very simple, pressing a button to ready the weapon you're holding, and releasing the button to swing, with some elemental rock-paper-scissors magic for flavour.

What I want to draw attention to, however, is the presence of a little square on the back of the elongated cartridge. That is a solar detector. This game actually requires the player to be out in the sun (or to have very peculiar lightbulbs, of which I've yet to find any) to complete the game. Depending on the intensity of the actual sun above you, a bar at the bottom of the game screen fills up. The more filled it is, the more benefits you have, such as regenerating magic faster, instakilling a few certain enemies that wander in outdoor areas in the game, fighting bosses, and many more. There are puzzles that have platforms that move to one side when receiving any sunglight at all, and to another when not receiving sunlight, requiring the player to cover the sensor sometimes.

All of the Boktai series have this light sensor element that encourages vitamin D absorption for completion. However, it is true that being out in the sun for long periods of time, so there's an alternative in Boktai 2 in the form of an item that fills the Sun bar a slight amount, just enough to go through most of the game.

While simple as far as gameplay goes, the puzzles can be quite challenging, as can the actual combat. Furthermore, after beating the story boss, there are games to do after the credits, such as two bonus areas with enemies far stronger than the rest of the game has, as well as a curious crossover story with another Game Boy Advance game!


Nope. Not spoiling this one.

Furthermore, the game has a fun minigame when it comes to weapons. There are swords, spears, hammers and guns (or to be precise, a single gun). After some game progression, the player unlocks the blacksmith, which allows to combine two weapons to create a third. If they are two weapons of the same kind, it creates one of the same kind, while combining different weapons creates the third kind. With the many weapons the game has, all the different effects and qualities, this is sure to be a time sink (not to mention in-game currency sink...)

It is a fun game, very challenging if the player wants to achieve 100% completion, with a gripping story I really don't want to spoil for anyone. If you can, try and find it, it is well worth playing!

If you do, let me know what you think!

I hope you have a good week!