Today I'll be talking about a favourite of mine, long overdue and long recommended in other reviews. 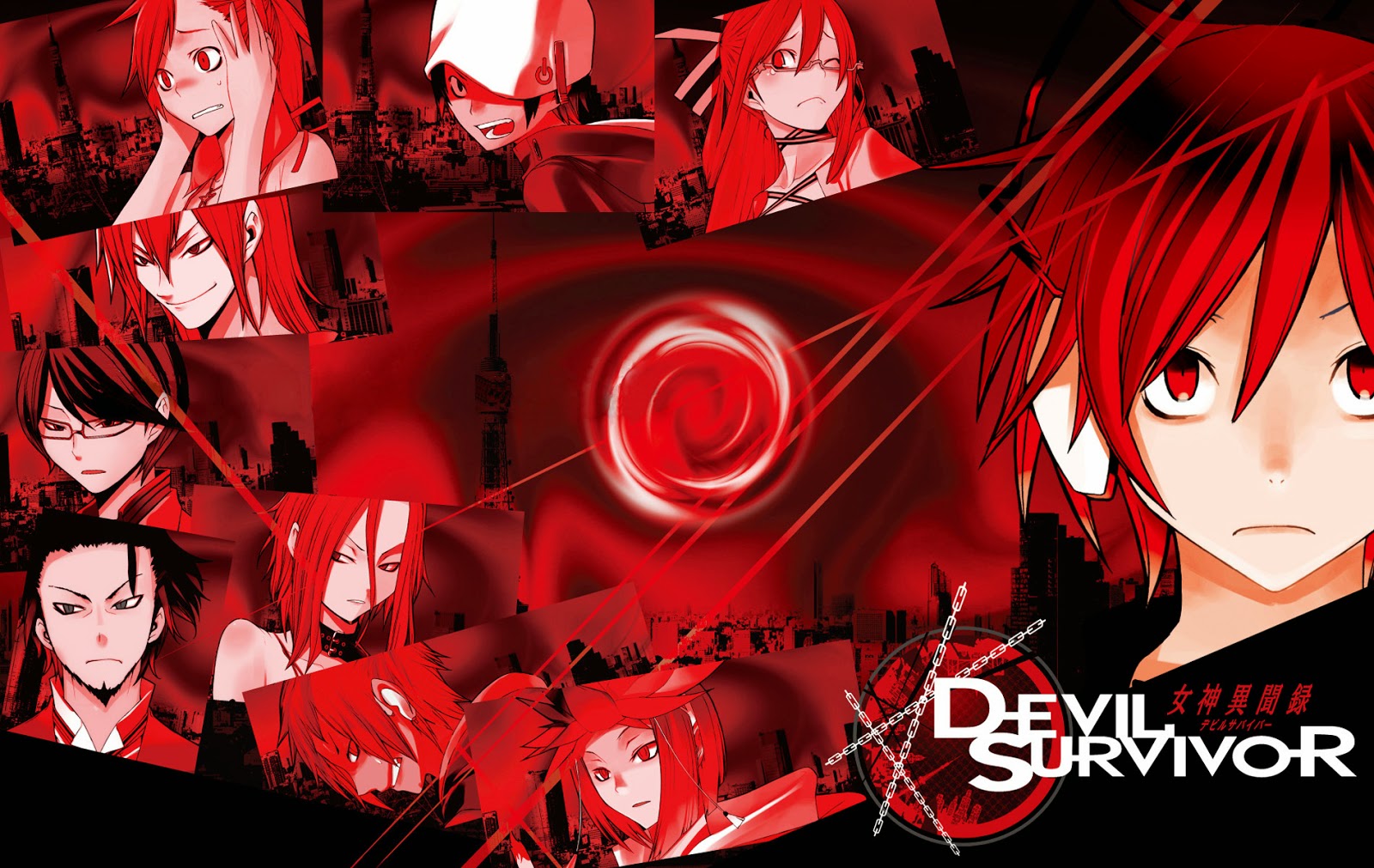 Developed by Atlus and released for DS, and shortly for 3DS in an upgraded rerelease named Devil Survivor Overclocked.

Picture a world where people are given access to beings with powers (much like Pokémon), with wild ones roaming the world.

Now move the subtle scariness of Pokémon to the front and make them actually deadly.

Devil Survivor is the story about a late teen (a nameless protagonist) and his two best friends Yuzu and Atsuro, as they find themselves inside a lockdown in one of the districts of Tokyo, after being summoned by the protagonist's mysterious cousin and given portable computers that have a program that can summon and control demons (that looks suspiciously a lot like a DS or a 3DS depending on your version).

From that point on, things get... well, exactly how you'd expect if people were given control over creatures with incredible power.

But that's not all there is. Factions are fighting for power, a war between heaven and hell starts ravaging the city, and for some reason, the protagonist seems to be involved in it all...

While the protagonist is nameless, he is hardly mute. Throughout the game, you are given chances to speak with both team members and important NPCs in the lockdown. Depending on what your choices are when speaking to other people, certain events might or might not happen, people might join your team, fight against you or even die. Furthermore, you might find out that the lockdown might have more to it than just keeping the demons in.

The game takes place in a week (plus playable/bonus level epilogues in the 3DS version), with the choice for which ending you'll get taking place at the end of the 6th, each choice being available or not depending on your behaviour throughout the week.


The characters are well written, complex, flawed and memorable. The story unfolds as much as the player is willing to explore it, the game even allowing to completely skip time periods until the next important event (Such as a mandatory boss battle), to the point where you can know everything, or nothing.

The game is heavy on grinding for experience and money, however. The level of enemies scales up way faster than the player's level does, leading to many hours fighting the free time battles to be able to move onto the next part of the game. Even with the New Game+, where you are allowed to keep most of what you earned throughout your first run, there will be times where all there is to do is fight the same enemies over and over.

The battles are presented slowly, with new elements being introduced at a steady pace to help the player get a good grasp on how everything works (something that is lampshaded by Atsuro during one of the battles). The steady learning curve until the player is able to function on their own is a great boon.

As for the music... I can honestly say that it's got one of my favourite soundtracks to date. Most of it is what I would describe as Rock, with some Punk thrown in every now and then. Moody when it needs to be, inspiring when facing certain bosses, and one of the songs is actually plot relevant!

The 3DS version comes with a couple extra goodies. Depending on which ending the player receives, there is an 8th day, complete with extra bosses, fights and story to keep the player coming back. It also changes how the New Game Plus functions, allowing the player to "buy" the right to keep demons, remove XP caps, etc, by virtue of getting achievements throughout the playthrough (such as reaching certain ending, filling the monster log by a certain amount, etc). This adds a lot of complexity to the new game plus, as opposed to simply allowing the player to rerun the game with max level characters. Last bonus is that the game is almost completely voiced, with every main character having their lines read by a voice actor.

All in all, while grind-heavy and time consuming, the story and music on their own more than make up for it. If you have a DS or 3DS, I recommend you give this game a try, particularly if you're a fan of the Shin Megami Tensei series, and even if you're not, if you like complex plots of intrigue and mystery, you might also enjoy it.

You know what? Just go play it. It's worth it.

As a recommendation, I will just say that if you haven't, give a whirl to any of the Shin Megami Tensei series. All of them have most gripping stories, ones that will keep you on the edge of your seat.

And for those that have, remember that this game has a sequel which, while not in the same timeline, has the same gameplay and aesthetic, but with a whole new story for you to explore.

I hope you give this game a shot. It's one of my favourites, and I hope it becomes one of yours too!

Keep on dreaming and have a great weekend!
Posted by enistoja at 01:31