Demon's score, only because I miss Elite Beat Agents

Today I want to talk about a game for smart phones:

This is an adventure rhythm game, where you tap the circles that appear on screen, slash the circles with swords and drag along lines, all in time with the music.

Its gameplay is STUPIDLY similar to Elite Beat Agents/Ouendan! (They were developed by the same team, after all), but the similarity ends there.


You take control of Serenity, a young woman trying to find her father, who sent her a mysterious email that installed an app to her phone called Demon's Score.

She journeys to the lab where she knew he was working, and finds out that the whole place is overrun by monsters and demons!

Shortly after, she meets David, a poor shmuck who got his soul blown away from his body, and thrown into that of a teddy bear's.

From that moment on, it's a cheesy, over-the-top series of battle scenes against named and unnamed demons, set to their own different songs.

Most of the demons are stereotypes bordering on parodies of certain musical genres. For instance, one of the later bosses you fight is Beelzebub, to a very jpop-sounding tune. Behold the madness:

Fight enough bosses and you find Serenity's dad. But I won't spoil the ending.

I'm going to talk about the gameplay flow next.

Every level is divided into Track 1 and Track 2. You can consider Track 1 as a warmup, and Track 2 as the boss of the level.

Every boss you beat allows you to sign a pact with them (Read: Buy a new outfit for Serenity with different defense and xp acquisition stats with real money). Depending on what demon you have chosen to be for the level (or if you don't have any at all), Track 1 will change. It usually is similar to the original boss's theme, but with slight differences.

After that, comes the boss fight, which is usually a decently rendered fight between Serenity in whichever outfit you might have chosen for her and the Demon, embodying a musical stereotype. 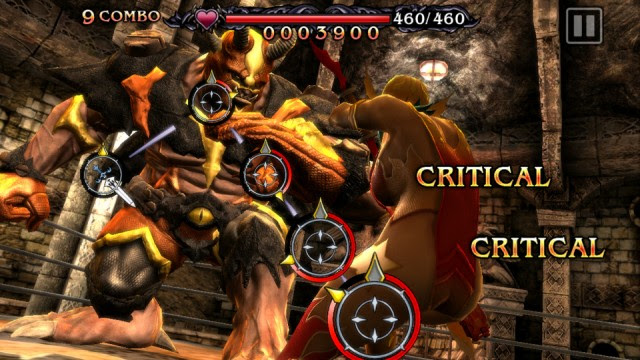 The boss fight, depending on the demon being fought, can be completely silly or dramatic. To the left is pictured the fight against Azazel, parodying a masked wrestler, with some mexispanish guitar music to fight him to. (If it helps, think of Dark Pit's theme from Kid Icarus: Uprising, I'll be talking about that later)


Most of the music is pretty memorable, ranging from metal, to rock, to disco. I'll admit I have been interested in getting the songs, sadly, they don't seem to be available anywhere (To my limited google-fu knowledge). Just on the basis that each song was composed by a different person, the different styles are noted, but since you hardly hear one clashing song after the other, it's not jarring.

Now, I've been avoiding a topic for this review, but it's time to face it: Each demon gives Serenity a different outfit, and most of them are... well, they leave little to the imagination.

I'm not going to show the more skimpy ones. If you want to see them, go find them yourself.

Furthermore, if you chose a demon, all cutscenes and dialogue will feature the voice of the demon you chose, as opposed to Serenity. Yes, some demons are male and some are female. Yes, hearing Serenity talk with a deep-throated voice is a bit jarring. It still allows for some replay value, if you buy a new outfit, you'll want to hear the boss banter and David vs possessed-Serenity talk, since some demons are much more vocal in their distaste for the situation than others.

I am an audiophile, and for the music alone, I'd say yes. However, there are two things that draw the game back for me:
1) Hidden cost: Unlocking all outfits costs extra money, with nowhere in the app's description saying it does.
2) Too much cheesecake and sexy shot: That is just a personal gripe. I know many people will not see this as a drawback, but this is just my opinion.

Now, Squeenix, if you could release the OST of this game for me to get, I'd love you forever.

All in all, it's funny, got good music, cheeky and with a slightly compelling story woven throughout.

I'll leave you to decide whether it's worth it or not. There are some videos on youtube, if you want to take a look. (Though most with the skimpier outfits, and getting permission to use those videos here would take a bit of time).

Like the title says, I miss Elite Beat Agents, and I'll take any spiritual successors I can get.

If you want another rhythm game with similar gameplay, try Elite Beat Agents for DS.
If you want another story about acquiring demons to help you on your journey, with similarly awesome soundtrack (But that's all there is to be similar between this game and the recommendation), try Devil Survivor, also for DS


Thank you for reading, and I'll see you next time!
Posted by enistoja at 01:49