A city of former deities, a failed arranged marriage and a fierce paladin

This week I want to talk about a most interesting book. 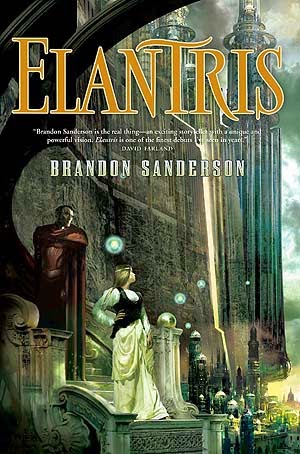 Elantris is a book written by Brandon Sanderson, published on 2005.

The book is about the titular city of Elantris, where people who are randomly turned into magic beings move to live in.

The people in Elantris are powerful magic users, and they keep the kingdom of Arelon they're part of afloat without much problems.

That is, until there is an earthquake that destroys part of the city.

After that point, all Elantrians go from glowing beings of incredible power to speckled, sickly people that are unable to heal from any injuries they might sustain, from bruises to gashes. They still remain immortal, however, which makes their lives incredibly painful.

Thanks to Elantris's fall, the city of Arelon starts having economical and social problems, with Elantrians now labeled as pests and second-hand citizens, to the point where any Elantrian is forbidden from leaving the city, and any new Elantrian thrown in without much thought at all.

It is in this state of turmoil that the story begins.

Raoden, the heir to the throne of Arelon, turns Elantrian overnight. Charismatic and thought to be the only person that could save the kingdom from ruin, is now part of the problem and tossed into the city.

Sarene, Raoden's fiancee from an arranged marriage, from a faraway land, is told her husband-to-be died while she's en-route to Arelon. She suspects an assassination plot, and begins digging aorund the city.

Hrathen, a high-ranking figure of a religion that is turning into a militaristic force, arrives on Elantris, and starts making his religion popular. Yet there seems to be a bigger plan behind only making the kingdom join his religion.

The book follows each of these characters, their plots and turns as they try to save the kingdom from themselves, and maybe get Elantris back on its feet.


Elantris is a fantastic book with intrigue and mystery. Action, adventure and three characters with different approaches to trying to save the city and kingdom they love.

If you can, give the book a try!

I can't recommend it enough.

Hope you have a fantastic week!