It's been a long time coming but I decided I should write about it.

This week, I bring you 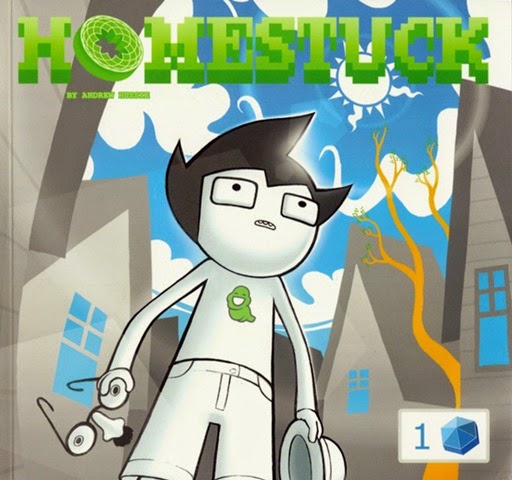 Homestuck is an ongoing multimedia work created by Andrew Hussie, started on April 2009.

It is also really hard to write about without incurring major spoilers.

The story follows four kids that get a Beta copy for a game called SBURB, which upon installation, reveals itself to allow each of the kids to connect to another's computer and physically alter their surroundings. It also gives them access to mysterious machinery that bellies a bigger purpose than simply allowing them to make their houses bigger.

As the story progresses and the game reveals more and more components of itself extending far beyond their computer screens (to the point where they mostly use computers to communicate with each other), an overarching story is revealed that involves not only the kids, but their caretakers, an alternate world they are thrown into upon clearing the first obstacle of SBURB, and eventually an alien species that also played their own version of SBURB.


Part of what makes Homestuck interesting is the varied and intriguing cast. While easily over 70% are teenagers, they are portrayed realistically, making mistakes and growing as people as the story moves along. Furthermore, the author has stated that the reason why the characters are drawn in simple styles (barring major moments) and with literally white skin colour is to emphasize that ethnicities and body types are not important to the story, leaving them as blank slates for fans to fill with their own identities.

The characters are varied, with only a select few being shallow on purpose, the rest having rich backgrounds and motivations, allowing for a great variety of interactions which are, in the end, what makes the bulk of the story.

The author also masterfully uses callbacks, visual echoes and subtle (and not so subtle) foreshadowing, to the point where the story has actually retroactively changed to reflect what happens later in the story. Let it be known, however, that these changes are NOT intrusive nor obvious, so rest assured if you fear spoilers.

It is a very complex story that eventually also incorporates time travel and parallel universes, so it can be quite daunting, and that isn't even touching on the length of the work itself.

Let me tell you, this story is LONG. While most updates in the comic are images without text, many others are an image that serves as an establishing shot for a conversation between two or more characters. And yet some more are animations, be them short animations to punctuate certain moments (Such as a character kicking notebooks under her bed), to fully animated shorts that serve as climatic moments for each story arc. There are also a select few interactive elements, where the reader takes control of characters to explore areas, talk with other characters, and uncover more of the plot. All in all, it takes quite a time to read, let alone catch up to the latest updates.

It is an interesting story, though due to its length and sci-fi/fantasy elements, it is certainly not for everyone. Should you decide to give it a try, I recommend you read until the end of Act 3 (together, the first three acts are less than a quarter of the whole story). The reason is that the first couple acts are slow, and while they set up the groundwork as far as characterization and humour go, they don't quite showcase the depth of the rest of the work.

Should you find yourself not interested after reaching the end of act 3, you most likely won't find enjoyment in the rest. But I think it's only until then that the story truly kicks off, so you should at least give it that long.

I hope you give it a try, and if you do, let me know what you think!

Have a fantastic week, and keep on Dreaming!