A planet's worth of riches

After two weeks of pause (vacations are NICE), I am going to try and write three entries before next Monday!

So, here's the first one. 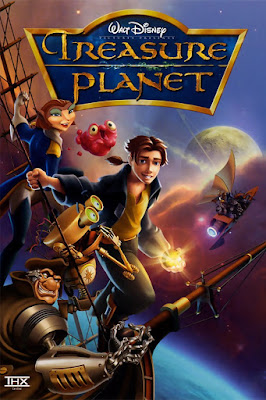 Treasure Planet is the 43rd of Disney's Animated Canon, released on the second half of 2002.

Treasure Planet is the story of James "Jim Jimbo" Pleiades Hawkins. He is a late teen, gadgeteer genius and thrill seeker. The combination of those have landed him in trouble many times, to the point that he knows the penal code better than the robotic police force that apprehend him often. This has led to friction between him and his mother, the owner of an inn that she runs on her own.

Things are tense between the two until one day, when a spaceship crashes into the dock outside of the inn. Jim saves the pilot from the ship and takes him back to the inn. Upon arrival, the survivor gives him a puzzle sphere, and warms him to beware the Cyborg.

After that,  Jim figures out that within that sphere is a map to a particular planet where a legendary pirate supposedly hid all of his treasure after years of pillaging. A family friend funds an expedition to the planet, believing that it will help with Jim's behaviour.

From that point it is the story of the adventure that Jim undergoes, learning more about the universe, other people and most importantly himself as he matures.

This movie, just like Atlantis in the last entry, has a beautiful blend of traditional and 3D modeled animation, with many elements in backgrounds along with the ships modeled in 3D and most characters animated traditionally.

The attention to detail on the main ship alone is breathtaking, let alone the impressive work that was put on one character that blends both animations together, having robotic parts made with 3D computer animation, and the rest of his body traditionally animated.

The music is also something to be noted. With the main theme being sung by the lead singer of the GooGoo Dolls (and Alex Ubago in the Latin American translation, if that means anything to you), and the rest of the score by James Newton Howard, it is well worth paying close attention to it.

While this movie does suffer slightly from Smurfette Syndrome AND doesn't do anything revolutionary in terms of story, it is a rather good story about growing up, and the technical skill that went into every detail of the movie more than makes it worth watching.

If you have an hour and a half to spare, you should give this movie a try!

If you do, lemme know what you think!

If you have any other movies, games, shows, etc you might want to toss at me so I write about them, leave a comment and let me know!

I hope you have a fantastic week, and keep on dreaming!