A story of humanity's resilience

This time I want to talk about another animated movie about space, and the willpower of human race. 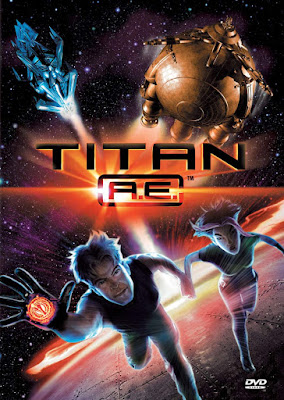 Titan A.E. is a 2000 sci-fi animated movie produced and distributed by Fox, and directed by Don Bluth and Gary Oldman.

Titan A.E. is a movie about The Chosen One to Find a New Home for Humankind.

Yeah, the plot is pretty much a Hero's Journey, but I'm here for the art and the character designs, so let's breeze through this!

Cale is a child when an alien race known as the Drej, in their perceived threat from humans, attack and destroy Earth, forcing humankind to flee into space, and live out in space colonies as best as they can. His father, before fleeing, gives Cale a ring, asking him to take care of it for it is of great value.

Fifteen years later, Cale is approached by a Captain Korso, who claims to be an acquaintance of his father and shows him that the ring is a map to a ship with the capacity to create a new planet for humans to call home.

At roughly the same time, the Drej start hunting Cale, fearing the threat that mankind might pose if all of it reunited once more.


As the story progresses, Cale goes from not caring about the cause and other humans to feeling personally invested in this tale of struggle against all odds.

If you squint, you can see that both Treasure Planet and Titan A.E. have very similar plots and character developments.

And you will also notice that both got the can in a really big way when they were released in the big screen.

While Titan A.E. tries to up the scale and stakes, it is awfully formulaic and the plot paves no new roads.


Where it excels, in my opinion at least, is in the varied designs of everything. From ships to aliens to maps, it is visually stunning, with lots of thought clearly put in designing the non-human characters.

While we're on the topic of art, it also has a plenty good soundtrack, with slow orchestrated songs followed shortly by rock pop in the next scene. (I do not know music genres, do forgive me for I have probably said musical heresy in this last paragraph).

All in all, it is a pretty good movie that suffered of being released so close to Treasure Planet (And Treasure Planet suffered of the same thing, to be quite frank). You know how the plot is going to continue, yet it is still charming in its own way, and well worth sinking an hour and a half into.

I hope you enjoy it as much as I do, and if you give it a try, let me know what you think!

If there's anything you'd like me to see/play/listen to, leave a comment and I'll try my best to get to it as soon as I can!

Thank you for reading, and I hope you have a fantastic week!

Two fun facts:
(1)Both main characters in Titan A.E. and Treasure Planet have very similar haircuts.
(2)At the start, Cale and Korso are exposed to the vacuum of space. Korso tells Cale to "Exhale!" seconds beforehand, which scientifically is the best course of action, to prevent further inner damage than a human body would suffer otherwise.