Learning about your powers is a hard job

This week I've got a cartoon for you! 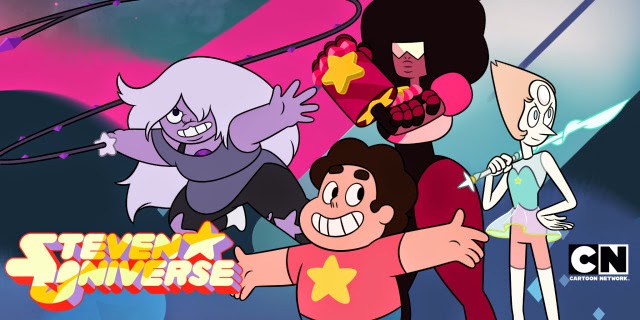 Steven Universe, created by Rebecca Sugar and produced by Cartoon Network, is about a young boy, the titular Steven Universe, and his sisters/aunts/friends, the Crystal Gems: Garnet, Amethyst and Pearl.

Each of these characters has some manner of semiprecious gem on their bodies, and they're able to use it to summon magical weapons they use to fight evil monsters trying to destroy the world.

What's interesting is that, unlike the Crystal Gems, Steven is a child and does not know how to control his powers just yet; though he more than makes up for it with a good attitude, willingness to learn and often functioning as the one that keeps the Gems together when things turn sour.


Steven is a boy eager to prove himself, and this proves to be a hindrance as often as it proves to be helpful. Steven is a very capable kid, but he's still a kid, so he's got lots to learn, both about the world and the Gem he inherited from his mother upon his birth.

On the other hand, the Gems are very skilled warriors, capable of great feats of strength and agility. Not only this, but the symbolism on them is heavy, and very well thought out.

Each Gem (and Steven) has a semiprecious crystal on their body: Garnet has two garnets, one on each of her palms, Amethyst has her namesake on her chest, and Pearl has hers on her forehead. The location of the gems happen to match with chakra points, and furthermore we have a clear division of Id, Ego and Superego in the Gem's personalities.

Just glossing over here, but you can always look up all the delicious theories regarding the Gems.

The show is lighthearted, fun and full of action, though it isn't afraid to veer into more mature subjects such as aging, and the loss of a parent. It is about a child growing up, and learning about his place in the world. Unlike most other stories of the kind, though, Steven embraces the place that the world has saved up for him, and he wants to fill it by being himself (Sometimes to the aggravation of the other Gems).

One more thing about the show is that it has gorgeous music; from the intro theme to the songs that the characters occasionally sing, including all the background music. Personal recommendation: Giant Woman.

If you have some time to kill, I highly recommend you give this show a try. There aren't many episodes yet, so it won't be an archive binge like some other stories I've suggested before.

For an added bonus, the creator has mentioned that the Gems are nonbinary (For those not in the know, that means that they don't settle for either male or female gender, but find their identities to be out of those two altogether), so extra thumbs up for representation!


For other cartoon that is similarly about a child growing up, and that has not shied away from more sober topics either, I recommend Adventure Time.

Thank you for your time, and I hope you have a wonderful week!

Keep on dreaming, and see you next time!
Posted by enistoja at 21:33