Terribly sorry about the constant delays, life's a bit busy right now. But I'll do my best to keep up with the schedule (starting with catching up...)

This time, I wanna talk about a movie that is still in theaters! 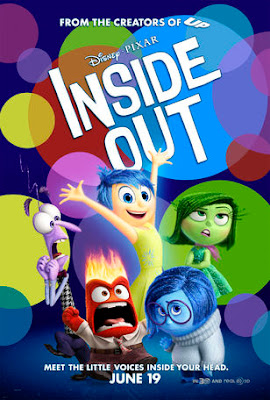 Inside Out is a movie created/produced by Pixar Studios, published by Disney.

It is a very interesting approach towards emotions, repression of 'negative' feelings, depression and how, in the end, all that a person feels has a point of origin and, while it may or may not be appropriate, it is a feeling with validity that should be addressed instead of pushed aside.

The movie is about Riley, a girl with a generally cheery outlook on life, and how everything changes when her parents and her move to a new house on the opposite side of the country (Apologies to any US readers, I am not familiar with US geography).

At the same time, it is also about Riley's Emotions. Within her, there are five beings that represent the basic emotions of Joy (yellow), Sadness(blue), Anger(red), Fear(purple) and Disgust(green). While Riley is her own person, each of these beings colour how she approaches new things and how she remembers them. While Joy is the dominant one, each has a turn on the wheel, so to speak. Each memory is represented by a coloured sphere, where the colours reflect each of the Emotions, and easily showcase how Riley feels about that memory. It is also a very easy visual aid to notice that Joy pretty much runs the show.

Another important factor is that while Riley has thousands of memories, there are a few important memories (referred to as Core memories) that basically give her an identity, expanding the world within her mind with her interests. All of those core memories are yellow, and Joy likes it that way.

The process of moving and having everything change around them affects both Riley and the emotions within her, to the point where a new core memory is created that is blue, after Sadness. This causes a domino effect that causes huge imbalances in Riley, both inside and out (hehehe).

That there is the basic outline of the plot.

As the story progresses, it is revealed that Joy saw reason for all other emotions to exist, but Sadness, and that made her think little of the blue emotion, to the point where she actively tried to stop her from doing anything that might affect Riley. However, slowly she realizes that sadness has a place and a reason, helping process hard times and grow up as a person.

This, I find, is a very important lesson to be learned. Not only for Joy about Sadness, but all other emotions that we all experience. Emotions are very valid, and while some of them are irrational (like for instance my irrational fear of flying wasps and bees, but not ones that have landed), all of them have a big effect on our lives and should not be dismissed, but acknowledged and addressed, lest emotional turmoil might cloud our judgements.

I'll segue here into the societal view against sadness. From the fact that it is still thought that depression is a simple matter of "Cheering up" to the fact that it is viewed in a very negative light to express sadness in public (and don't even get me started on "Boys don't cry"). All of this stems from what this movie so cleverly presents: Pushing down sadness as something that has no value, and no reason to exist, when it does.

While it is not a perfect masterpiece of a movie by any means, it is very good at what it sets out to do: Showcase emotions, and instill emotions in the audience. Be warned, after the midway point the movie starts delivering emotional blows and it doesn't stop until the credits have rolled. I highly recommend having tissues nearby (and/or rubbing those tears into your skin, they are great for cleaning the skin, but that's unrelated).

On the technical aspect, the movie is positively gorgeous. From the design of the Emotions making them look like they are made of particles to the unique way of representing the inner workings of the mind, it is beautifully done and imagined, and well worth watching once for the story and twice for the visuals alone.

On yet another note, I want to point out that this movie has a decent split between male and female characters, passes the Bechdel Test AND has women of many different body types.

Wow... sorry about that long wall of text up there. I just really liked this movie.

I hope you like it as much as I did, and if you didn't, I want to hear why! Let's start some polite discussion here!

Thank you very much for your time, and I hope you have a fantastic weekend!

Final thought: Just because someone might have it "Worse than you", it doesn't mean that you are "Well off", or that the way you feel isn't valid.