Hello, Dreamers! This week I am super late! And I apologize!

For today I want to talk about a board game!

Join me in this first time happening as we behold 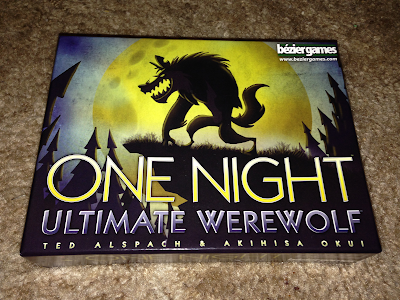 One Night: Ultimate Werewolf is a board game published by Bézier Games and designed by Ted Alspach & Akihisa Okui.

This is a fast-paced, 3-10 board game where the players take roles of villagers in a town under siege by werewolves. During the night, chaos is rampant, but during the day all citizens, werewolf and human alike, get together, try to figure out who is a werewolf, and execute them. If the person executed was a werewolf, the village wins. However, if a villager was killed, the werewolves win.

The fun lies in the fact that, at night, the wolves and most citizens have actions that let them guess who might be something, as well as change what other people claim they are.

The game is played exclusively with cards that have the name of the kind of person the player is going to be, from a hunter to a werewolf, going through masons, minions, tanners and troublemakers.

Gameplay is as follows:
Roles are selected amongst the 12 existing villagers, so the total roles in play are 3 more than the number of players actually in the game, while two of those roles (at least) must be werewolves.

At the start of the game, each player picks a card at random, looks at it without letting others see, and put it in front of them on the table.  Once everyone has their card, the fun begins.

All players close their eyes and stand up. One player without a role (or a nifty app developed for this exact purpose) reads out what each role in play does, one at a time. Each role is different, with some simply having the players open their eyes to know who else is that role, while others do more mischievous things like switching around cards in the board, revealing what one card is by turning it face up, and many more.

Upon the end of all the roles, everyone wakes up and has 5 minutes to figure out who might be a werewolf. Upon the end of that time, a vote is cast. Whoever gets voted for the most is killed! It is up to the werewolves to trick everyone else into thinking they are -not- werewolves, and choosing someone else to be killed.

The fun lies in the fact that, since cards moved around during the night, the werewolves might not necessarily be a werewolf anymore, and who started the game as a villager that does nothing might now be another role altogether.

For clarification, only people that end up with werewolf cards count as werewolves. If someone's card is changed during the Closed Eyes phase, they still act like the role they saw when they drew a card.

In the end, it's up to the players to figure out whether their role is still the same as when they started, figuring out if they're on the werewolf or the village side, and hopefully realizing before enough information has been revealed to ruin any plans.

It is fast, it is fun and it puts both deductive and acting skills to the test.

If you're interested, you can buy the original and the expansion over at bezier's page, along many other games they have developed. It is well worth giving a try!

Sorry for the delay, and I hope you enjoy this lil board game!

If you give it a try, lemme know what you think!

Thank you for reading and I hope you have a fantastic weekend!
Posted by enistoja at 23:26