Now, YOU are the boss at the end of the dungeon

This time I want to write about another board game! 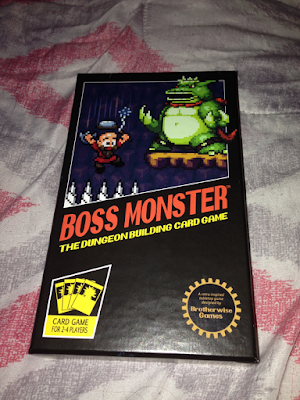 Boss Monster is a board game developed by Brotherwise Games.

In this game, you take on the role of the Final Boss of a dungeon. Your mission? To build one that will attract heroes by what riches they can find in it, and have them die within.

Yeah, you're the bad guy here, and not even playing against the good guys, but against your rival bad guys.

But not often do you get to play the bad guy in board games (when you're not basically playing as Fate), so I thought it'd be interesting to talk about.


This game is played with various different cards: the boss monster cards that show what monster each player is, room cards to build the dungeons with, spell cards to alter how some things might work, hero cards which can be considered the currency and goal, and Epic Hero cards for when the game is reaching its end.

The game starts with each player receiving a Boss monster card at random, as well as a few room and spell cards. The turn then proceeds with two hero cards being revealed per turn, everyone playing a room card to build their dugeon, heroes being lured into the dungeon and then clearing (or dying in) the dungeon.


Spells are played at different points of the game, and they can make things like empower heroes in other dungeons, instakill heroes or even empower rooms to make sure heroes die while trying to clear the challenge.

Furthermore, rooms have different values, from the kind of loot they have (which attracts different kinds of heroes), how much damage they deal to each hero and whether it is a trap room or a monster room. All of these lead to the strategy that the player must create and adapt to. Due to the random factor of the cards, each game will require a new strategy, lending to lots of replayability value.


The artwork is a love letter to NES era games, with all illustrations being rendered in sprites that wouldn't be out of place in an old Castlevania or Megaman game. Further detail is that while many cards are repeats, few actually repeat artwork, for instance having one of two cards representing a maze have a funny little map with a "You are here" written in there.

All in all, it is fun, it requires strategy and has lots of different ways to play, making it fun to play over and over!

If you can, get it and give it a try!

Let me know what you think!

Bonus: A few shoutouts in the heroes! 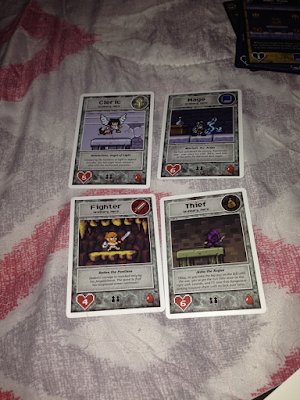 Kid Icarus, Magic: The Gathering, and Ghosts & Goblins! The Thief is just there for funsies.
Posted by enistoja at 00:16